In their early days they wore a silver livery with the 306 squadron-code (TP-) on the nose; in later years they were camouflaged and subsequently their P- registration was added.

The Netherlands received 24 aircraft, delivered between November 1955 and January 1958. The first 18 were coded TP-1 to TP-18, the others were coded with the P- registration right after their arrival. 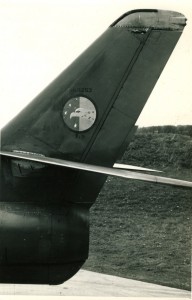 All Thunderflashes were operated by nr. 306 recce squadron. The aircraft were phased out in 1963, with the arrival of the RF-104G; the surviving Dutch Thunderflashes were transferred to Greece and Turkey where they were kept in operational service till 1971. One of them was returned from Greece to Holland in 1988 and is now in the Soesterberg museum, repainted as TP-19.