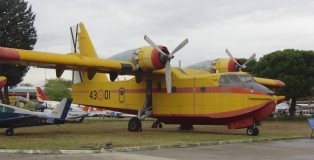 Spanish Air Force Museum Madrid, Spain, November 2011 The Museo del Aire -the museum of the Spanish Air Force- is situated a few kilometers south of Madrid, in a corner of Cuatro Vientos AB. It exhibits an impressive and interesting collection that includes rare birds such as the Heinkel HE-111, the Junkers JU-52 and onr of the three aquired Boeing KC-97L Stratotankers, used to do in-flight-refuelling of the Spanish Phantoms. And although especially the outside part of the display could use a bit of maintenance/repainting it is well worth visiting! Frank was in the Museo early November 2011.