The roaring Sound of Thunder filled the air when on a regular flying day some 40 Republic F-84F Thunderstreaks of both 314 and 315 squadrons took off from Eindhoven Air Base for different missions.

Impressive was the sound of the Wright J-65 jet engine, the air vibrated and the soil was shaken, when pilots pushed these robust flying machines to full power on the brakes before take-off.

As young spotters positioned only a few hundred metres away ,close by the fences of the Air Base, we were watching carefully, noted down the registrations of the incoming and outgoing aircraft and took as many photographs of them as possible, despite – keep in mind that we are talking here about the Cold War Days – frequent patrols by Military Police and Base Security Personnel, who tried to prevent us from doing so. (Today authorities are grateful to us for having managed to save so many pictures from those days for posterity!) 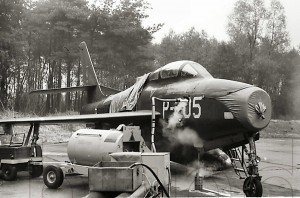 The described scenes, which we experienced, have made an everlasting imprint in our minds and are still today vividly engraved in our memories.

Our website Thunderstreaks.com is dedicated to what we refer to as our “Golden Years of Spotting”: the period between 1961 and 1979, when lots of time, effort and money was spent to see as many military aircraft as possible. Our main station at the time was Eindhoven, an airbase of the Royal Netherlands Air Force that hosted a number of Thunderstreak – and later of NF-5 squadrons. No need to say that it was the Thunderstreak that inspired us to give the chosen name to this site.

After our Golden Years we continued our aircraft spotting activities and we also include a selection of photographs taken in these later and more recent years in our website. 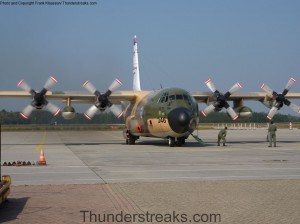 Most pictures on this website have been taken by ourselves, by Frank Klaassen, by Hans Engels or by Gijs Hiltermann; please note in this respect that all the pictures posted by Hans on this website can be recognized by his full name – Johan A. (Hans) Engels (J.A.Engels) – added to the photo(text) ;often the letters HE or CHE have been added ;all other pictures have been posted by Frank ,(mostly accompanied by the letters FK or CFK) or Gijs (GH or CGH or coll GH).

if we did not take the photo ourselves – which occurs sometimes when they happen to fit in in one of our picture-galleries – we always own the original negative/slide (so we have the copyright). Although not obliged to do so, we are prepared to give viewers credit by adding their name if they rightfully claim to be the actual photographer of a picture on the site. Just send us an e-mail!

Occasionally we make use of official photographs, issued to us for publication purposes; we will mention this in the appropriate cases.

If you would like to use one or more pictures of this website for any purpose (in publications and/or on other websites or otherwise) , you will have to and we expect you to contact us first by sending an e-mail to info[at]thunderstreaks.com holding your request.

Our site will of course constantly be improved and updated.

Our website offers you the possibility to view lots of pictures out of our collections.

They can be viewed in more than one  way. Either you click on the category of your choice in the upper-banner (E.g. Airshows & Open Days, Spotting, etc); all categories are under-divided in different galleries and by clicking on one of them you will reach the according pictures. Or, if you want to be informed on the latest updates on the site, click on one of the nine messages/thumbnails that appear on the homepage.

In both cases a thumbnail overview will appear; you can now view each picture in its normal size by clicking on the thumbnail. If you want to start a slideshow, click the “play” button that is shown on the bottom-left side of the picture.

Enjoy and experience our “Golden Years of Aircraft Spotting”! 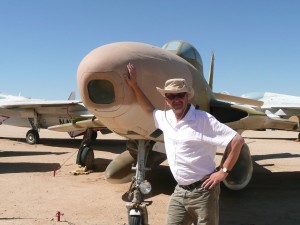 Frank is an aircraft spotter since 1966. A frequent visitor to airshows. Was one of the founders of FLASH Aviation Magazine; the magazine itself was published till 1982, but the name FLASH still exists. It was adapted by an aviation shop in Eindhoven city. 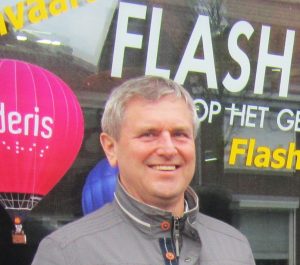 Gijs is in the aviation business since 1960!

He was one of the guys starting the aviation magazine FLASH, one of the first private magazines made by local spotters. In the eighties he published a number of books, under which “West German Military Wrecks and Relics” and some issues in the “Vliegend in Nederland” series: one about Dutch Thunderstreaks and one about Dutch T-birds.

He is still busy with military aviation, visiting air shows, NATO exercises, museums or other interesting events. Another selection of the finest photos that he made during the last 40 years can be found at his site www.milaviation.com.

Being an active aircraft spotter since 1961,Hans saw many Dutch Thunderstreaks , still flying in their bare metal colour-schemes. He started making pictures in 1964 and took numerous photos of military aircraft since then. His two-day visit in 1976 to the aircraft carrier USS Nimitz in the Mediterranean was an absolute highlight.